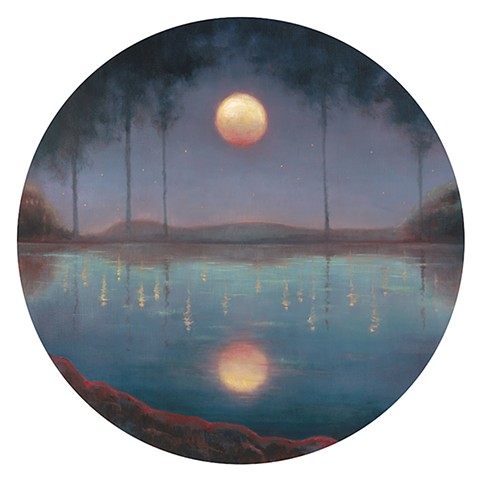 The Lamed-Vovniks
Oil on Linen
36" Round
< previous next >

This painting was commissioned by the historic Sixth & I synagogue in Washington DC. It is based on a Jewish legend about the 36 righteous people who will save the world.

I began this painting with a 36” circular canvas. It’s celestial in nature; I think of earth, sun and moon. The 36” is also in reference to the story of the Lamed-Vovniks; according to legend, 36 is the number of righteous people who were charged with preserving the world. 36 is double 18, or double Chai, the Hebrew word for “life.” I wanted to split the painting into two equal 18” half-circles on a horizon line.

To me, this landscape illustrates the terrestrial world and its reflection, mirror, or shadow of a hidden, concealed world, one that may house the Lamed-Vovniks. The 18 skyward stars reflect 18 figures, vibrating with life on the still water. When combined they also total 36. These righteous people are there to balance the ills of the world. It’s like the Lamed-Vovniks are cosmically entangled with us, like a star connected to its reflection in a pool of still water.

I think maybe the Lamed-Vovniks give us hope in their perfection. The idea of being nameless gives potential for each of us, because hey, we might be a Lamed-Vovnik after all. Who’s to say? And if we needed anything, it’s people striving for goodness, now and always. I feel hope when I think of them. To know that the world can balance like a spinning plate, held not alone by the rules of nature, but by the goodwill of humanity, gives me hope because the sun came up this morning and I know it will rise again.